Crowds of onlookers, including members of the Institute of Meat and London tourists, enjoyed the annual Boars Head Ceremony in London on Wednesday 28th November, when Liverymen from the Worshipful Company of Butchers, led by this year’s Master, Graham Baker, processed the traditional Boars Head to the new Lord Mayor, who received it at Mansion House.

The ceremony dates back to 1343, when the presentation of a Boars Head was agreed in payment for a parcel of land acquired by the Butchers Company. It takes place each November, shortly after the new Lord Mayor has taken up his year of office.

The Butchers have a Boar’s Head prepared and suitably decorated so that it can be carried shoulder-high through the City streets. This year the procession set off from the Pewterers’ Hall with a drum band leading the way and a police escort to stop London traffic. 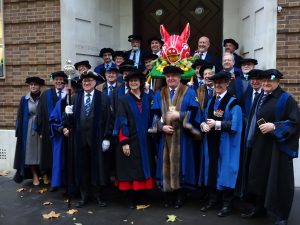 Upon reaching the Mansion House the party of butchers and guests are invited into the building, where the Lord Mayor officially receives the Boar’s Head. This year Liverymen were welcomed by Peter Estlin and Lindy Estlin the new Lord and Lady Mayoress.

At the ceremony in Mansion House the meat is sliced off the head and served to all attending, which is washed down with suitably festive drinks.