At the recent NFMFT AGM and Members Day Derbyshire butcher John Mettrick to took over as President
of the National Federation of Meat and Food Traders (NFMFT) from Kent based butcher Jim Sperring at the Federation’s annual meeting held at the CASA hotel, Chesterfield on Sunday 9th July. 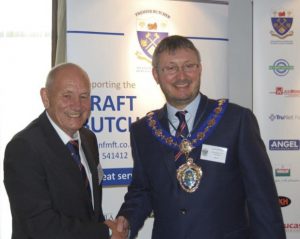 Following the announcement, John pledged to ensure that independent retailers continue to be engaged at Government level, adding:

“The federation will be engaged with the Department of Business Energy and Industrial Strategy and the Food Standards Agency to try and fashion regulation in such a way that craft butchers – farm shop and processors are not disadvantaged – but are valued and recognised for the part they play in the meat industry.

”The new president also appeared positive about the opportunities for members and butchers in general, despite economic uncertainty, and commented: “We are well placed to provide unique products and a unique service that supermarkets cannot offer.”

John who is an IoM Master Butcher and owner of the Award winning  Mettricks Butchers has 3 shops based in Derbyshire; Glossop, Stalybridge & Hadfield.

Mettricks focus is with the quality of their meat, as well as its freshness, its tast and its journey. This ethos has led Mettricks to win a multitude of awards, including but not limited to Britain’s Best Butcher, Britain’s Topshop National winner and Best Online Butcher.